Good lord almighty, has it honestly been 3 months since I last posted something here? I could spend a whole paragraph explaining why, but I won’t bother. I’ll just sum it up with one word: COLLEGE.

But, it’s officially summer, and with it comes its own brand of horrors; summer camp maniacs…shark infected beaches…and in my personal experience, the weather in South Carolina, that at this moment has resulted in me sitting in front of a fan, with the window open, hating humanity, but still refusing to turn on the AC because I’m a cheap, grumpy old man now. In that vein, I’m devoting the next 3 months to regular updates here, as we enter into the season that I like to think of as one big opening act to Halloween.

To kick it off, we need to talk about this year’s MAD MONSTER PARTY. Let’s jump in.

This year was a quick in and out. I don’t remember why, but I had to leave town much later than I wanted, which meant I arrived at the venue with about an hour and a half to work with before the whole thing closed down for the day. Folks, that is not near enough time to fully explore this particular convention, but you’ll be surprised what you can do when you have to. Luckily, several years of experience with this con has taught me exactly how to effectively prioritize autograph/picture opportunities.

Every year, there’s always one big guest for me. I just call it, creatively enough, THE BIG ONE. The one person that I would make that 90 mile drive to meet even if there was no one else there. This year, it happened to be George Romero, but his line was WAY too long when I first walked in, so for the sake of squeezing as much into the little time I had as I could, I immediately got into line to see my 2nd choice – Adrienne King! Of course, most of you know her as Alice, the final girl from the original Friday the 13th. She was incredibly nice, and luckily, we had a little time to talk. I was hoping to score a bottle of her wine, but she actually said she wasn’t allowed to sell it at the convention. I do plan on ordering some from her website soon though.

We talked for a bit and she mentioned that she was always annoyed at how quickly she got killed off in the beginning of Part 2 and the fact that the phone conversation she had in that scene was entirely ad-libbed and done in one take. I also had her record a station ID for Dark Entries: Goth Radio and scored the autograph above. Great times!

So, by the time that was all done, Romero’s line had died down enough so that I wouldn’t have to spend an hour standing in it. In fact, it only took a few minutes. I told you guys, my convention game is tight. I don’t mess around. Unfortunately,  he was not allowed to personalize the autographs, but he did scribble his name on this: 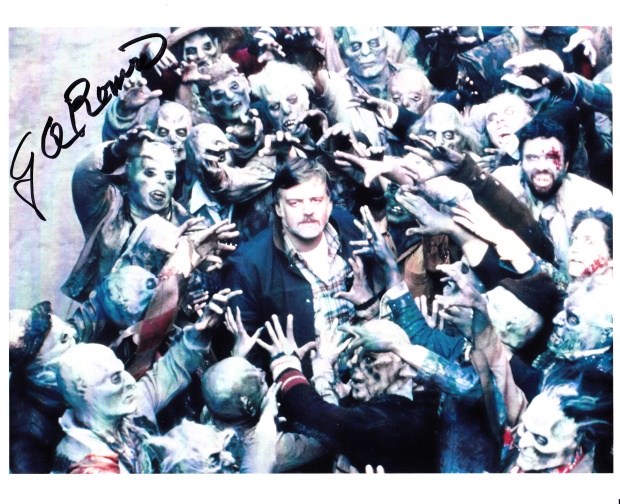 We chatted for a few minutes before I was shooed away from one of his people, but he was incredibly gracious and every bit as cool as I was hoping. He even agrees with what I’ve been saying for years, which is that Day of the Dead is the most underrated in the series. Straight from the lips of the master. You heard it here.

Next up, I went down the hall and knocked out some other favorites. First, I spoke to Ohgr of Skinny Puppy, who I chat with every time I go to this thing. We talked about the possibility of him calling into Dark Entries: Goth Radio sometime for an interview, which would just be the tits. He was selling a copy of John Carpenter’s ‘Lost Themes’ album on vinyl at this table for $40 and it absolutely killed me that I had to leave it there, but I had a tight convention budget that was getting smaller every minute. Let’s just say getting a George Romero autograph ain’t cheap, kids. I love that I’ve reached this surreal point in my life in which I can walk up to Ohgr once a year and he knows exactly who I am. 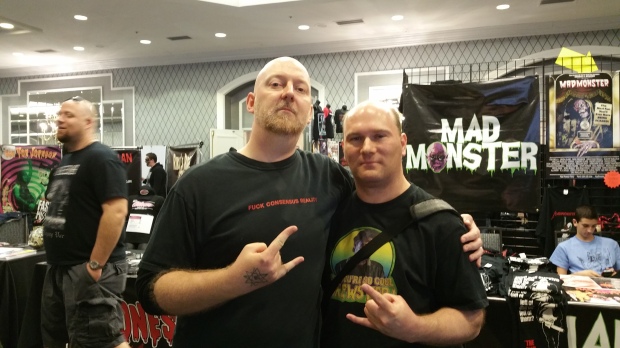 A couple tables down I got to meet another one that I was jazzed about – Louis Tripp! You know him as Terry Chandler from The Gate. At least, you should. If not, rectify that immediately! He’s a super nice guy and we talked a bit about his music, which I’m going to play on the show soon. I’m also going to work on getting him to call in for an interview. It was interesting to find that out that he had zero acting aspirations before The Gate, and after The Gate 2, he had no interest in being in movies again. These days, he focuses his energies toward his music and the way he sells it is fascinating. I saw on his table what I thought was a CD, wrapped in a strange fabric with a sort of small tube attached. It turns out, the delivery system for the album is one of the most interesting ways of selling an album I’ve seen in a long time. I really wish I’d broken down and gotten one now, but like I said before… Romero.

This seems like a solid place to wrap this up. I’ll be back in a few days with Part 2, featuring Dee Wallace, a cool VHS score, the scariest can of pea soup ever, and much more. Keep it spooky. We’re back, kids!