I don’t know about you guys, but I can’t get online right now without facing an onslaught of news headlines that just make me mutter, “Oh for god’s sake, what is it NOW?”. Since we’re all having our own version of The Shining going on right now and are in need of any diversion we can find that will keep us from finally snapping and…correcting…someone, it’s the perfect time to churn out fresh content.

New blogs and podcasts are popping up everywhere, and those of us with older ones are finally dusting them off and getting something done. Of all the surges I’ve been reading about lately, that’s the only one that doesn’t fill me with dread. I’ve got a backlog of ideas for things I’ve been wanting to do around here, and since I got laid off from the day job a couple of weeks ago, it’s not like I can say I don’t have the free time now.

Here’s a little nostalgic diversion that will send us straight to our happy places. So let’s go back to the 6th grade and get in touch with our bodies.

Calm down, it’s a class project I did for my 6th grade Health class:
THE BODY BOOK!

I don’t remember if this was some sort of massive end-of-the-year final project or just a regular assignment, but for whatever reason, I used it as an excuse to GO ALL OUT. I have specific memories of getting permission to skip “gym class” (basically playing kickball in the hallway) to sit in the class room by myself and meticulously write and draw this whole mess out over the course of a week or so. What resulted is partly my take on Inner Space and partly just an excuse to work the word “anus” into my homework. 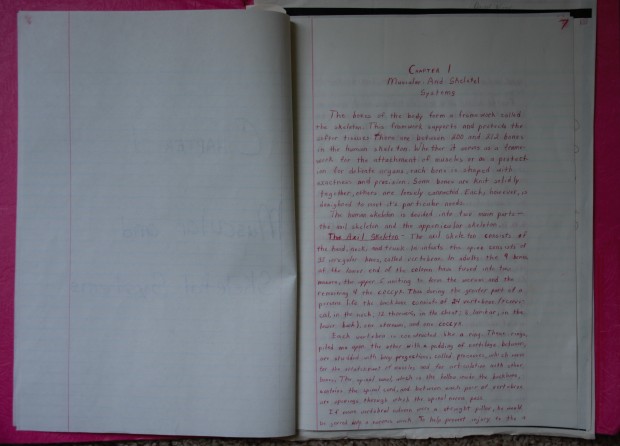 By “write out”, I mean blatantly copy some of this word-for-word from an encyclopedia. Not all of it was complete forgery, and I don’t know if my teacher (Ms. Owens) fell for my chicanery, or if she knew what was up and just let it slide (“A” for initiative and all that), but the end result was fairly impressive for a 12 year old, I guess.

Let’s hit some of the highlights.

If you look closely, you can see the page under this one that contains the original image of the skeleton that I used to trace this one. The book contains an even distribution of worksheets and original content written and drawn by myself. It will become pretty apparent as we go along which images were traced and which were done freehand.

The main thing that jumps out at me here is skeleton guy’s uneasy grin. I like to think that all the images that are to come are of the same unwitting volunteer. We’ll call him Slim Nobody. He has no idea what he’s in for.

“Chapter 2: The Digestive System” gives us a look at “The Story Of A Food Molecule” (some sort of horse pill?) and its path through said system. I know it’s been a while, but I’m not entirely confident that this is to scale, you guys. Is his stomach in his chest? Are his intestines wrapping around his heart? What the fuck is happening with you, Slim?

And here we have the real “meat” of the book, so to speak. If I remember correctly, I didn’t trace this, but rather sketched it all out by looking at some reference materials. Slim’s coming together nicely, although, again, I have questions about his innards. I only wish my liver was that big.

Making our way though the stomach and intestines,  my spelling is getting a little helter skelter, but not entirely inaccurate.

Chapter 3 lays out the nervous system, specifically the brain. I’m not sure if my Hellraiser obsession was in its beginning stages at this point, but I can’t help but think that I was subconsciously inspired by that first image of Frank’s newly formed brain when he clawed his way out of the floorboards. “Come to daddy…” 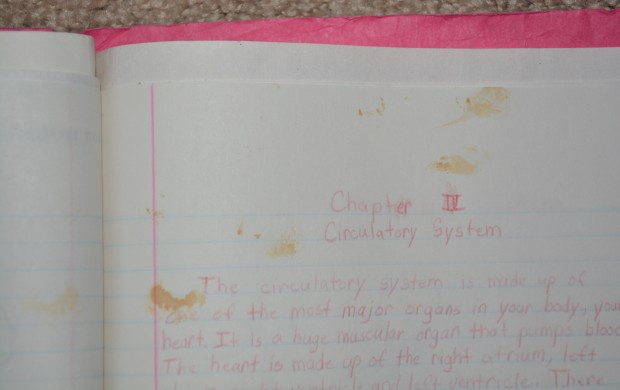 I’m not exactly sure what happened here.

This is the bit I’ve been waiting for. Slim has clearly dropped some hallucinogens, has tapped into his entire genetic and evolutionary past, and is having his own Altered States moment.

In Chapter 5, the third act twist is revealed. Slim has ovaries and gonads!! I was surprisingly progressive in 1989.

Chapter 6 introduces us to the “Exretory System”, which was evidence that I was obviously getting tired at this point. If you notice, the illustrations have also devolved from intricate tracings and labels to vague humanesque shapes. This entire thing is falling apart.

This is just something I drew after I was standing on the toilet and slipped and hit my head on the sink. I had a feeling it would come in handy in about 30 years. Something to do with time travel. Oh shit, I gotta get to work! 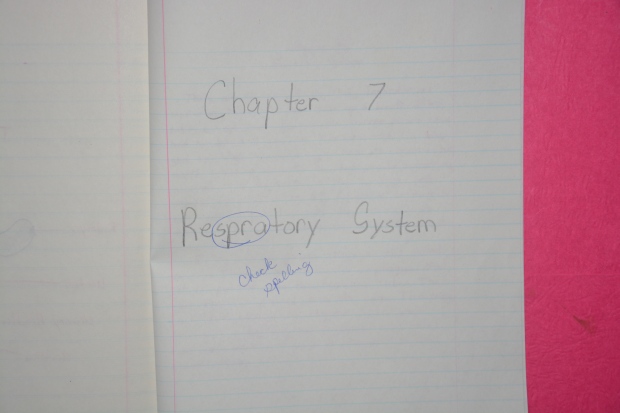 GET IT TOGETHER, DAVE. 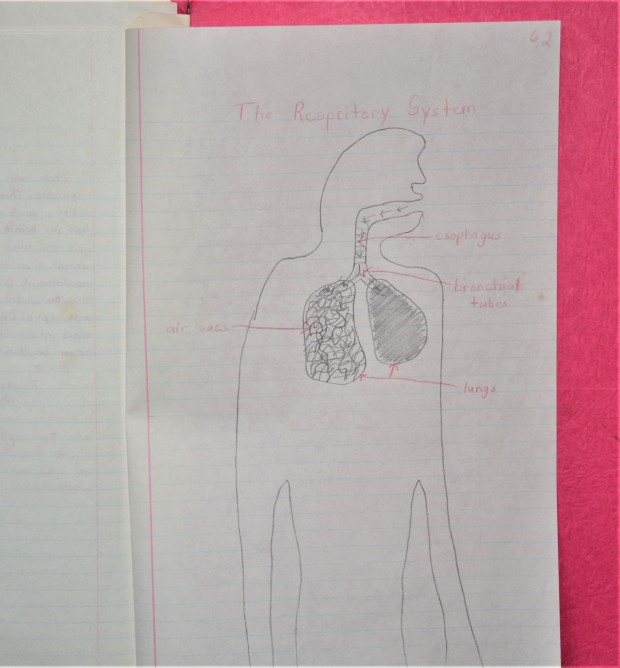 And now we reach the end. Slim’s been put through his paces just in time to get some new lungs and assume his final form as a half-assed (half-chinned?) version of Kinski from Nightbreed. Science!

“But Deej, what was your GRADE?”

Thanks, Ms. Owens! Sorry about all the plagiarism!