“I don’t like being the Wicked Witch of the West, but I know what happens when things get out of control.”

Angela speaks these words immediately after a good old fashioned panty raid, something that well, you just don’t see any more in cinema. Or in life, really. Panty raids, much like so many other things going on in Sleepaway Camp II: Unhappy Campers, are incredibly dated, but it doesn’t matter. This thing knows exactly what it is and what it set out to be. And I love every bit of it.

I’ve had a devil of a time trying to finish this post. I’ve been working on it on and off for over a week, but real life has gotten in the way. I’ve also struggled to find an angle for how to tackle this one. One thing I knew I wasn’t going to do was ramble on for 37 paragraphs about how I spent my childhood in my grandma’s laundromat. So, I’ve decided to kind of go a different way. I’m just going to give a very cursory plot synopsis and run down some of my favorite bits as they jumped out at me in no particular order at all. There are so many kills in this thing that I’ll have to skim over some of them, but the ones I will cover… hoo-boy, were they fun!

So grab a guitar and some bug spray. It’s time for the second part in my new series for the summer where I review the entire Sleepaway Camp series: SLEEPAWAY CAMP II: UNHAPPY CAMPERS!

After the events of the first film, Angela went off and got herself a lot of therapy, had a proper sex change, and now she’s back as a counselor in a new camp. We’ve all been there. But the important thing is she moved on, got back on that horse, and I’m sure she’s fine now.

She’s now playing the role of the morality police to it’s farthest extreme. She gleefully hacks her way through the camp, taking just enough time give a mini-sermon about how the victim has cheapened themselves or should have been a good girl or stayed away from the dope. She’s like a young Pamela Voorhees, only without the revenge trip. 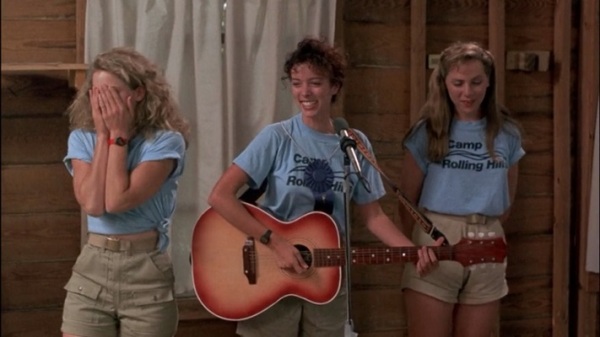 This time around, Angela is played by Pamela Springsteen (sister of Bruce), and while she doesn’t look exactly like Felissa Rose, I love her portrayal. While Felissa had a quiet, deadly shyness, Pamela is just full on bonkers. One of my favorite scenes is when she tests out various potential murder weapons while an unwitting victim is carrying on a conversation with her from across the room. After testing out the give of a clothes hanger and the bluntness of a hairbrush, she finally settles on a guitar string for strangulation. She does this with the casualness and wonder of a child finding just the right crayon.

After the first kill, we’re quickly introduced to this film’s crop of eventual victims. All the stereotypes are on display – the slut, the virgin (read: Final Girl), a pair if stoner sisters (aka The Shit Sisters), a guy called Sean who I’m calling “Not Ashton Kutcher”…

It also doesn’t take long before we get our first dose of T&A from Susan Marie Snyder (aka Mare). I’m pretty sure she spends more time in the movie topless than fully clothed, not that anyone is complaining.

Let’s cut to the chase. Rather than bore you with my take on the entire plot summary, I’m going to go a different way. Instead, I’m just going to highlight some of my favorite parts. 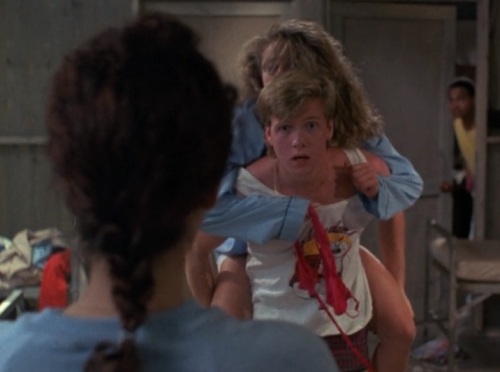 PANTY RAID! I mentioned this earlier, but what ever happened to panty raids? They were all the rage in the era of Porky’s, but as soon as the 1980’s ended, we as a nation collectively forgot about them.

Now, we get to the best part. THE KILLS. I’ll split these into two categories: SLASHER TRIBUTES and EVERYTHING ELSE.

We’ll start with Slasher Tributes. You get a hint to this on the cover art up top. At one point, Angela picks off a couple of unwitting victims incorporating some very familiar tools.

A Freddy glove! Two campers are hanging out in the woods dressed up to…honestly, I don’t know why they’re dressed up like this. One kid’s in a fedora and “burn makeup” and the other in a hockey mask and machete. “Freddy” gets it first after Angela steals his glove and slits his throat.

Next up, we knock out two tributes at once. Leatherface v Jason! Angela takes out the “Jason” kid with her own chainsaw and Leatherface-esque mask, that she just happens to be carrying around with her at camp. I mean, I don’t personally remember doing that at camp, but the one I went to was a church camp, so they were a little more strict about things.

It’s hard to get a good panty raid going at church camp.

Let’s run down some of my other favorite kills. EVERYTHING ELSE: 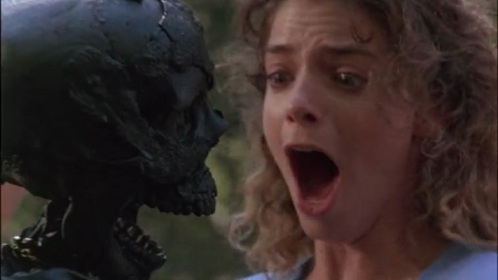 The Shote Sisters BBQ! (aka Shit Sisters). After finding the sisters out in woods, high and passed out, Angela decides to punish them for their transgressions, an MO she demonstrates repeatedly throughout the film. One sister awakens to find the other charred to a crisp and immediately gets the same treatment.

After raids both panty and jock, Mare flashes her taters a whole bunch more times, which leads to one of the most memorable kills in the series thus far:

Death by porta potty! It’s the worst swirly ever, complete with leeches. Even that kid at the beginning of Shindler’s List thought this was a bit much. 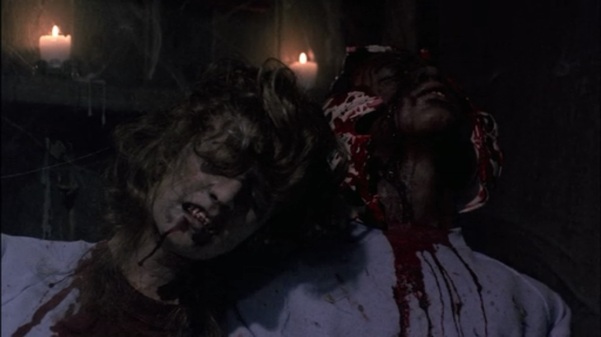 A few more kills take place and things lead up to a climax taken straight out of Friday the 13th Part 2. Angela’s got a shack out in the woods where she’s been keeping all the bodies.

We then get a face off between Molly and Angela wherein Molly falls down and bangs her head on some rocks, presumably dead. Angela gets away, hitches a ride with some daffy woman in a car, kills that woman (shocker), and then takes off in the car. Molly gets up, makes her way to a road, flogs down a car, and you-know-who is driving. “Howdy, partner!” THE END!

I loved it. I know I breezed through and may have spoiled a few things, but it’s still worth a watch if you’ve never seen it. It’s got T&A, inventive kills, mullets, stoners, a panty raid, slasher references, a batshit crazy killer, and a lot of fun.

Next up, I tackle Sleepaway Camp III: Teenage Wasteland. I’m buying the newly released Blu-ray for this one and may also cover the commentary and features. Before starting this project, I’d only ever seen the first two films, so from here on out, we’re going into all virgin territory. Come back and join me! This is a special time in our young lives and we’ll experience it together.

Oh, one more thing. You’ll notice a new link at the bottom of the home page for the site. It’s simply called, “THE SLEEPAWAY CAMP SERIES”. That’s a handy place you can go to find links to all these reviews. I’ll keep it updated as we go along.