As a kid, when it came to steakhouses, you had your Outbacks and your Longhorns, but for the after church crowd, there was only one game in town. Quincy’s. These days, there are only a handful of locations left (none around here), but back in the day they were all over the southeast. The thing everyone remembers most about them is their “big fat yeast rolls”. They were DELICIOUS and the other thing everyone remembers about them is the commercials.

There was a time, at least in my neck of the woods anyway, when that guy was as recognizable as Ronald McDonald or the Kool-Aid Man.

Around the same time, my dad worked at the advertizing firm who handled all of Quincy’s advertizing. Sometimes he would take me to work with him, and being that I was an aspiring artist, he’d let me hang out with all the conceptual artists there. These were the guys who invented the big fat yeast roll! It sounds like a really stupid thing to get worked up about, but as a kid, it was a pretty big thrill. It was like that time I got excited about meeting James O’Barr and having him autograph my trade paperback of The Crow. No, actually, it was nothing like that. James O’Barr was a dick. Also, I remember the offices in my dad’s building all looking like this:

At least that’s how I choose to remember it anyway.

Also at around this time, I got into collecting trading cards. I started out with baseball, but transitioned into slightly nerdier stuff later on. I’m guessing this happened somewhere in my early teen years, that sweet spot where your first taste of disposable income isn’t incumbered with things like taste or good decision making. My card collecting dovetailed with the comic book collecting, and since horror has always ruled above all of that, well you’ll see what happened:

I’m calling this the horror trading card notebook, even though you’re going to see a lot of nerdy comic book stuff too. Lay off. I was 14. Let’s open this thing up.

First page: X-Men. I was crazy about the X-Men trading cards back then, especially the ones designed by Jim Lee. I don’t think these are those, but I do have that entire set, complete with all the hologram cards separately.

Sorry for the state of this blurry one. I had to include it because the death of Superman in the early ’90’s was one of the biggest news stories of the decade. Also, note the “Holly Daye” cheesecake to the right.

Next up, proof that this notebook was ’90’s as all shit, The Crow and The Barbi Twins on the same page! I’d actually completely forgotten who the Barbi Twins were (or that I had one of their cards), but this brings back a ton of memories. They were everywhere in the ’90’s from Playboy to commercials to mugs. Most of their merchandise was the type of stuff you’d only find in Spencer’s, but lord, was there a lot of it. 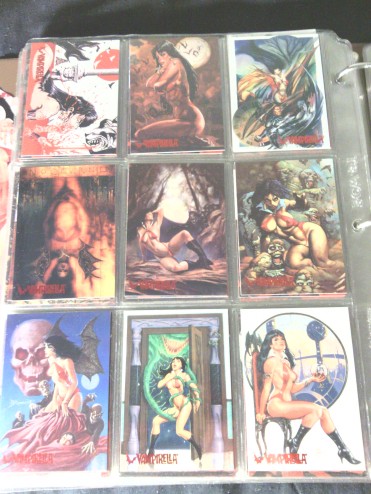 Being a huge fan of both comics and spooky stuff, Vampirella hit home with me pretty hard. Needless to say, I have this entire set of cards. There are a lot more than this in the notebook, but I’m featuring this page mostly for that one on the bottom left. If that existed as a t-shirt, I would have been the weirdo at school who always wore that very t-shirt.

I also remember this model showing up a lot in Wizard and making the convention circuit. These are the backs of certain cards, thus encouraging you to buy more cards in hopes of getting the middle boob one.

Now we’re getting to the good stuff. I love Universal Studios and all its monsters. I have this entire set. See the one in the top left? That also came with the set in the form of a poster that hung on my bedroom wall all through high school. Yeah, I uh… spent a lot of time alone as a kid.

The last page is just one of long cards. I’m only featuring it because they were oddly shaped and I really liked the top 3 because, surprise, I was also way into Sandman.

I know, it’s a major shocker that the nerdy, quiet goth kid also was (is) a huge Neil Gaiman fan. #walkingstereotype

And now the payoff. At the bottom, you can see a female Freddy Krueger and in the top right, Roxy from Gen 13. But, they’re obviously not the stars of the show. If you’re big enough of a horror fan, you’re know who you’re seeing here, but for those of you who don’t, that’s Angela from Return of the Living Dead 3. That one still holds a big place in my heart and I used to watch it once a week or so on VHS. I think it’s the only time I’ve ever had a crush on a zombie. I believe I took this from inside an issue of Fangoria. I used to have a subscription and am thinking about getting another one.

Thanks for reading all of this, all three of you. That was a long way to go to get from yeast rolls to a half naked zombie, but I’m glad we did it. I feel like it brought us closer together.